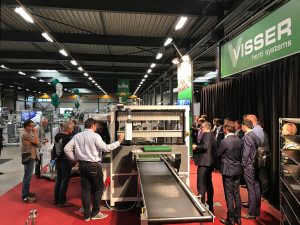 On June 12th to 16th, Visser invited growers from around the World to an Open House, to help them to celebrate 50 years of proudly serving the horticulture industry.

This exciting event featured 40 Visser machines, with multiple operating demonstrations with question and answer sessions. The open house also featured 13 seminars on various horticultural topics in which growers and industry product specialists had the opportunity to share and discuss growing practices, industry barriers and technology advancements. The goal of these seminars was to learn from each other in a group environment about best practices and opportunities to further develop products and growing methods to make the horticulture industry stronger.

One of the highlights of the show was the unveiling of the revolutionary AutoStix machine. The AutoStix machine, a collaboration between Ball & Visser is considered a breakthrough in the future of transplanting. The machine was developed to automate the process of sticking unrooted cuttings. The AutoStix cuttings strips are capable of holding cuttings with different stem diameters, while still able to position the stems firmly into the media without damaging the soft tissue.

If you were unable to attend the Visser 50th Open House celebrations, the AutoStix machine and other Visser horticultural solutions will be on display at Cultivate’17. Stop by the Bellpark Horticulture booth # 2847 to see the latest in horticultural innovations from Visser, Mayer, Logitec Plus, DryGair & Newlux Horticultural LED Lighting.